There have been many past attempts at building a "decentralized internet". Most of them have focused on rebuilding the networking layer to facilitate decentralization of trust.

This leads to a superior user experience where all Vapor apps are simply HTTP based web apps, and no one needs to run a "P2P node" and have deep tech knowledge. To end-users, Vapor apps are indistinguishable from a normal web app because Vapor is literally HTTP.

Request an invite to get notified of the upcoming Vapor node beta release:

Vapor is an OFFCHAIN Bitcoin protocol for building a decentralized web by "Bitcoinizing" HTTP requests. In essence, it's a protocol for authenticating and wrapping HTTP requests inside Bitcoin transactions, making it possible to replicate HTTP requests across multiple interested parties in a trustless manner. 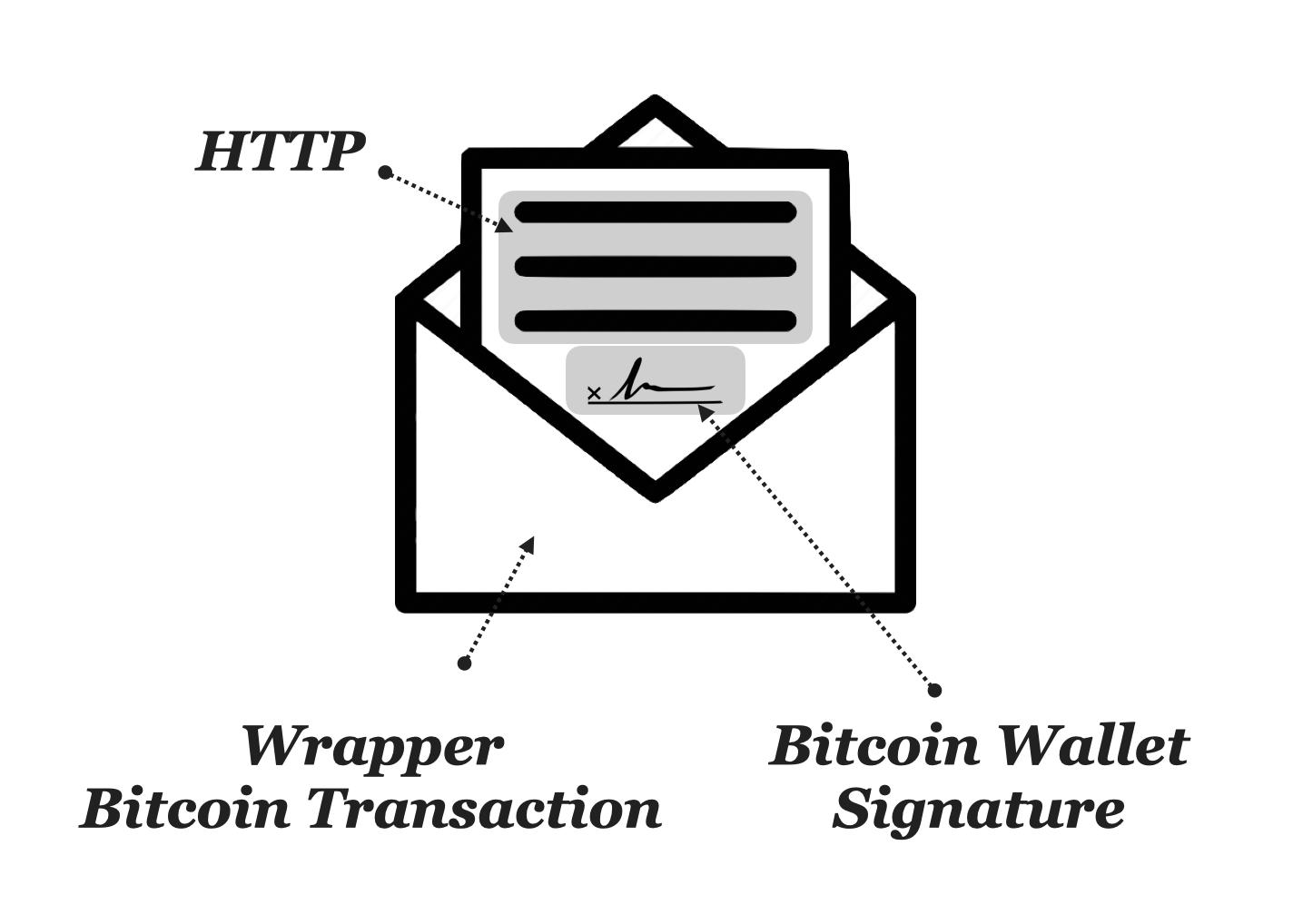 Because every API request is explicitly signed by a Bitcoin wallet and stored as a Bitcoin transaction with immutable bitcoin transaction IDs, it is possible to propagate a single HTTP request to multiple independent parties, complete with authentication information attached.

This makes it possible to build decentralized web applications that can trustlessly synchronize API requests with one another as well as natively monetize data through Bitcoin payments.

There have been many attempts at building a "decentralized web". Most of them see decentralization as a networking problem and focus a lot of their efforts on decentralizing the networking stack, as seen below: 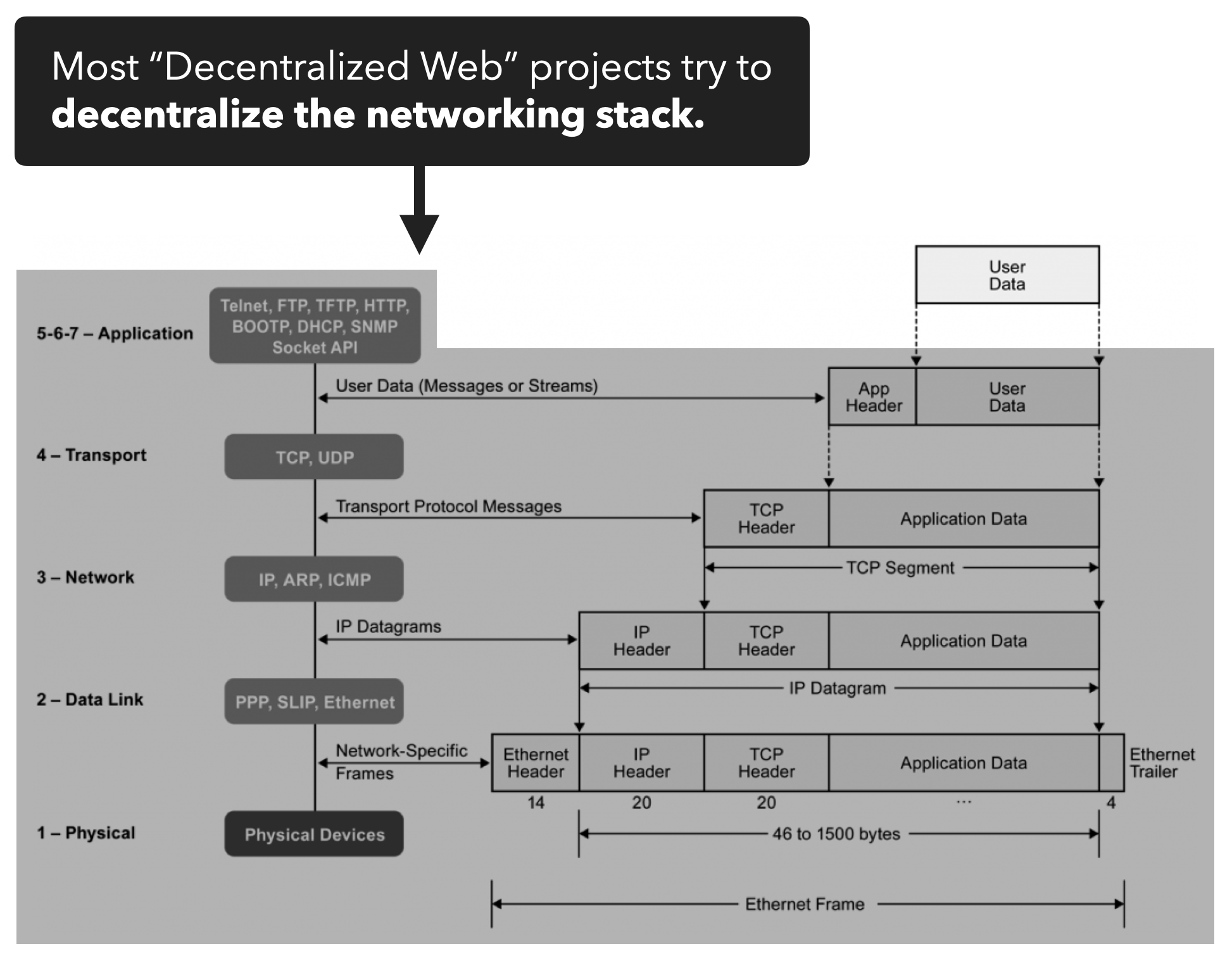 Vapor takes the opposite approach. Instead of trying to reinvent the networking stack, it focuses only on decentralizing the data layer, as seen below: 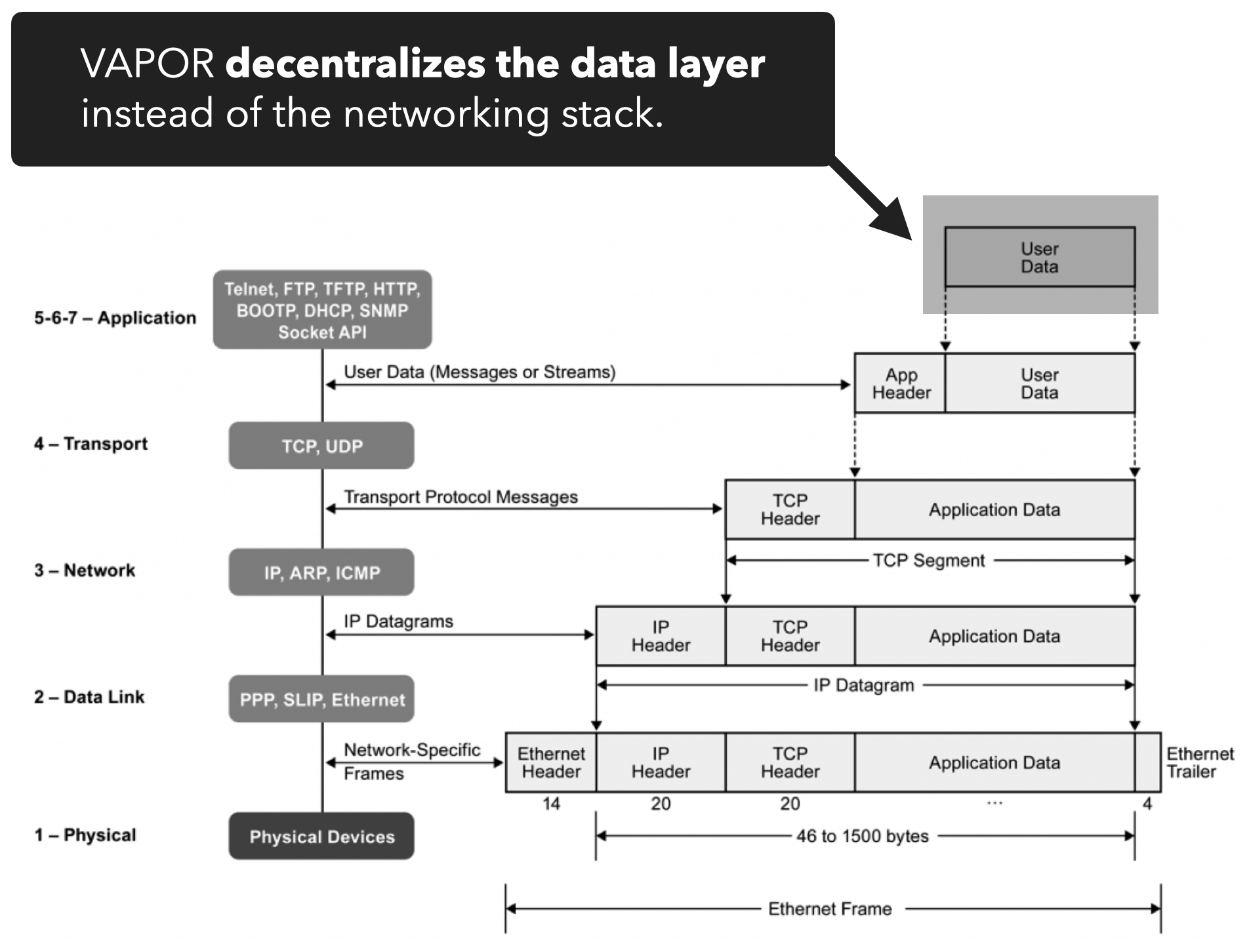 There are many benefits to this approach:

Here's an overview of a Vapor request lifecycle: 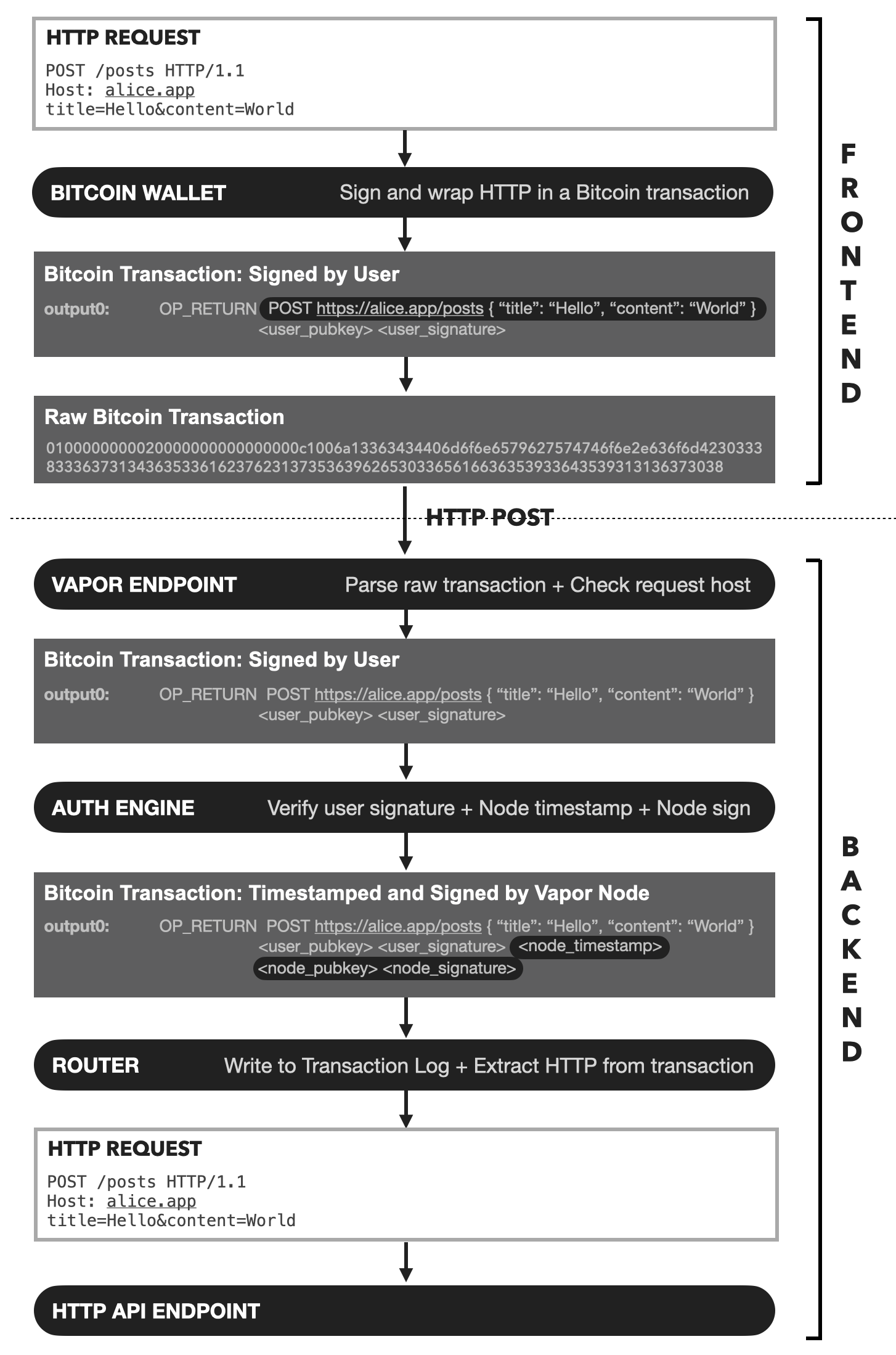 The protocol serializes an HTTP request and wraps it inside a Bitcoin OP_RETURN output script. This is then signed with a Bitcoin wallet's identity private key and included as another output script in the transaction. The resulting Bitcoin transaction is sent to a destination Vapor API endpoint over HTTP.

A Vapor endpoint only accepts HTTP POST requests with a raw bitcoin transaction as payload. The endpoint parses the transaction to extract out authentication information, validates the signature, and then forwards the extracted HTTP request to relevant API endpoints.

Also, each API request is timestamped and stored on the server for evidence as a Bitcoin transaction, creating an API log. This API log can be easily replicated to multiple parties in a trustless manner through various means.

By default, every Vapor API request is timestamped by the Vapor node with its local unix timestamp. 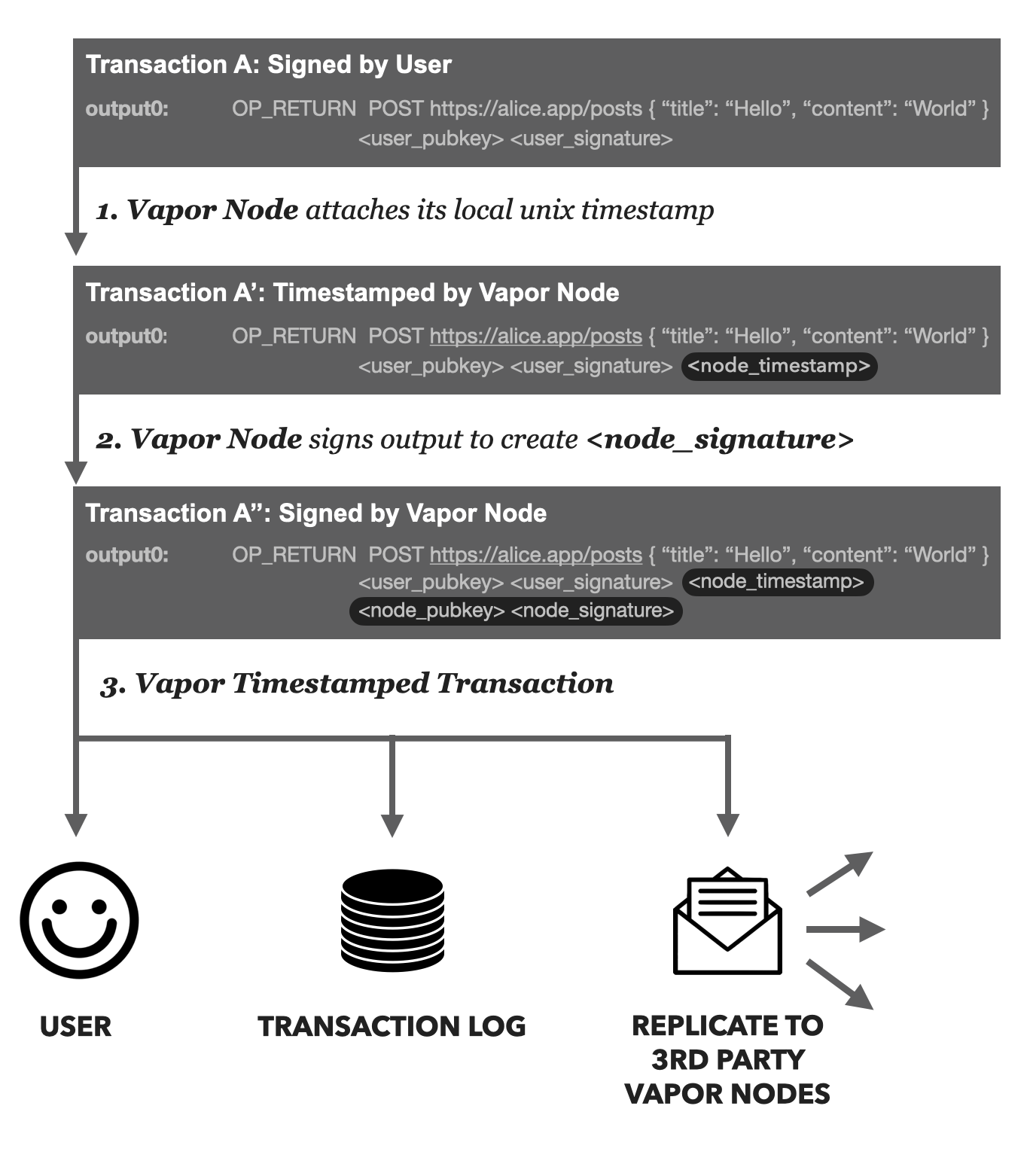 It's like every API logging system, except that every log item is cryptographically signed by both the user (The user wallet) and the service provider (The Vapor node).

Because all API requests are structured as Bitcoin transactions, it is very simple to send these to the blockchain. There are two ways this can happen: 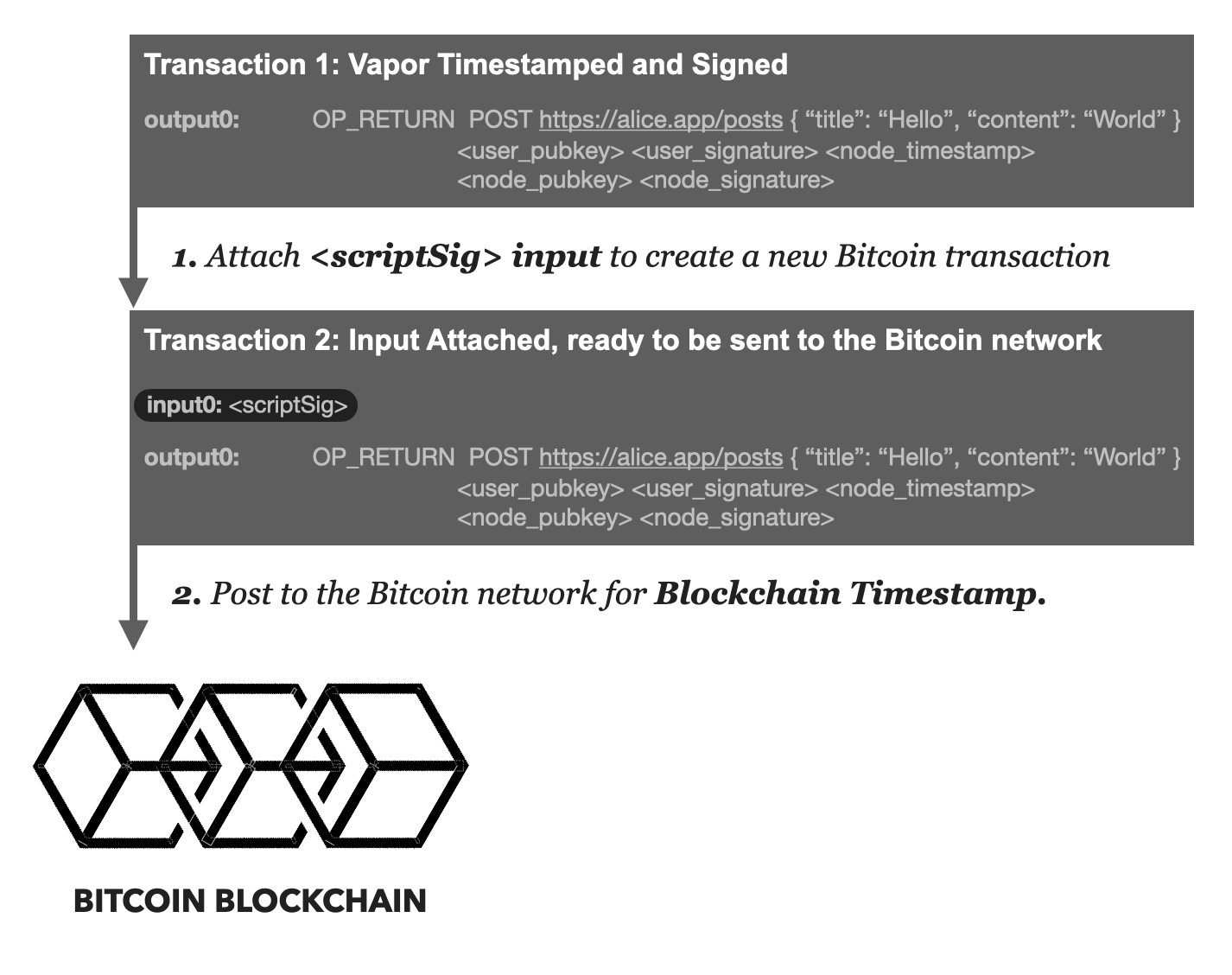 A blockchain timestamp (Block hash/height) is less precise than Vapor timestamp (Unix timestamp) but is beneficial because the timestamp will stay on the blockchain forever.

In the existing HTTP based web paradigm, everything is stored on a private database owned by service providers.

This means it is trivial for anyone who has access to the server (employees, hackers, etc.) to tamper with the user data without any repercussion because there is no evidence of anything. 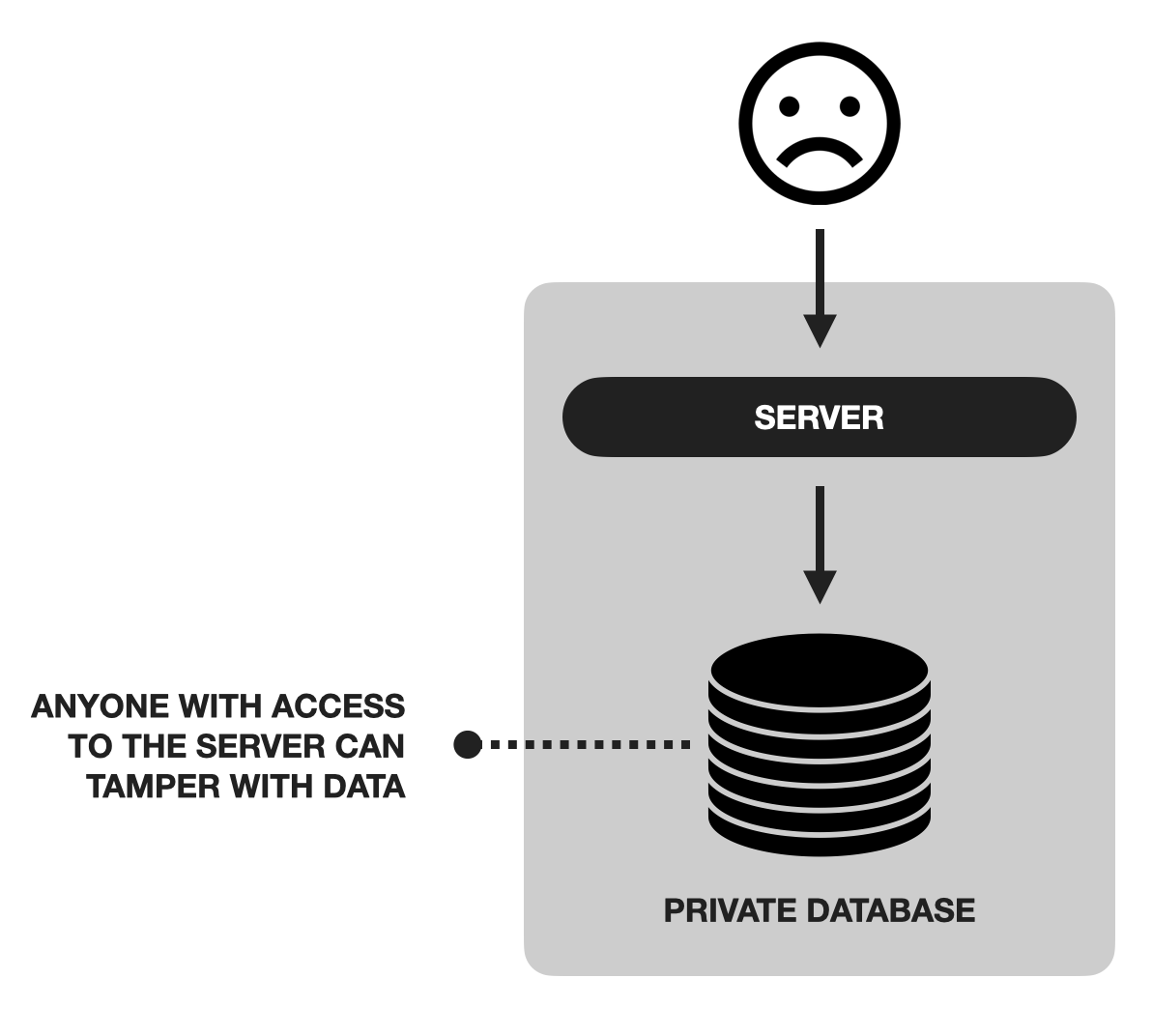 With Vapor every API request is double signed--first signed by the user, and then signed by the service provider (Vapor node)--and the evidence is stored both on the transaction log as well as returned to the user as receipt. The user may store the receipt transaction as evidence. 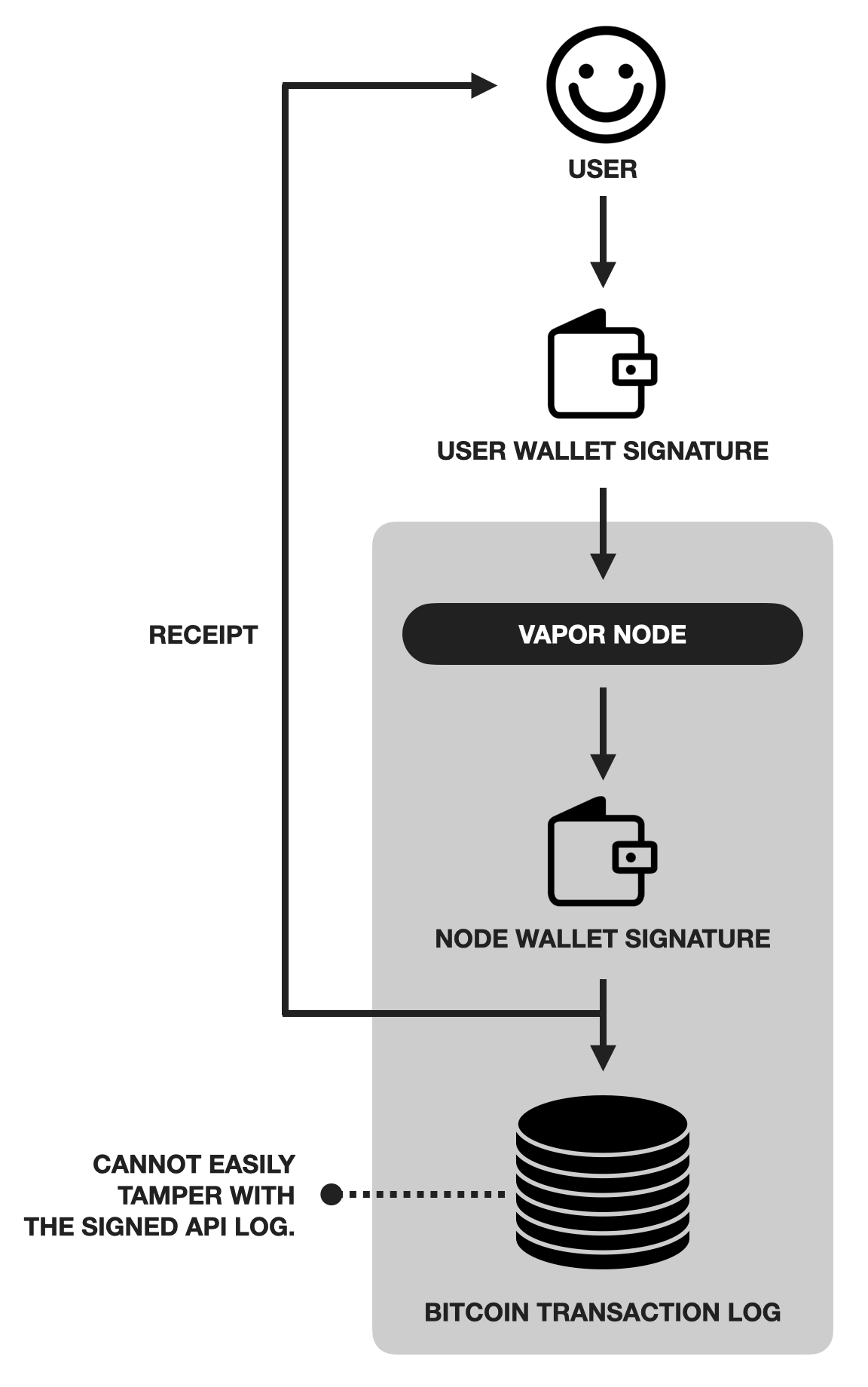 This has a couple of nice effects:

Furthermore, unlike normal HTTP requests which are ephemeral, Vapor's Bitcoinized HTTP requests are timeless. They can be recorded, persisted, and replayed at any time in the future, by anyone who is interested. 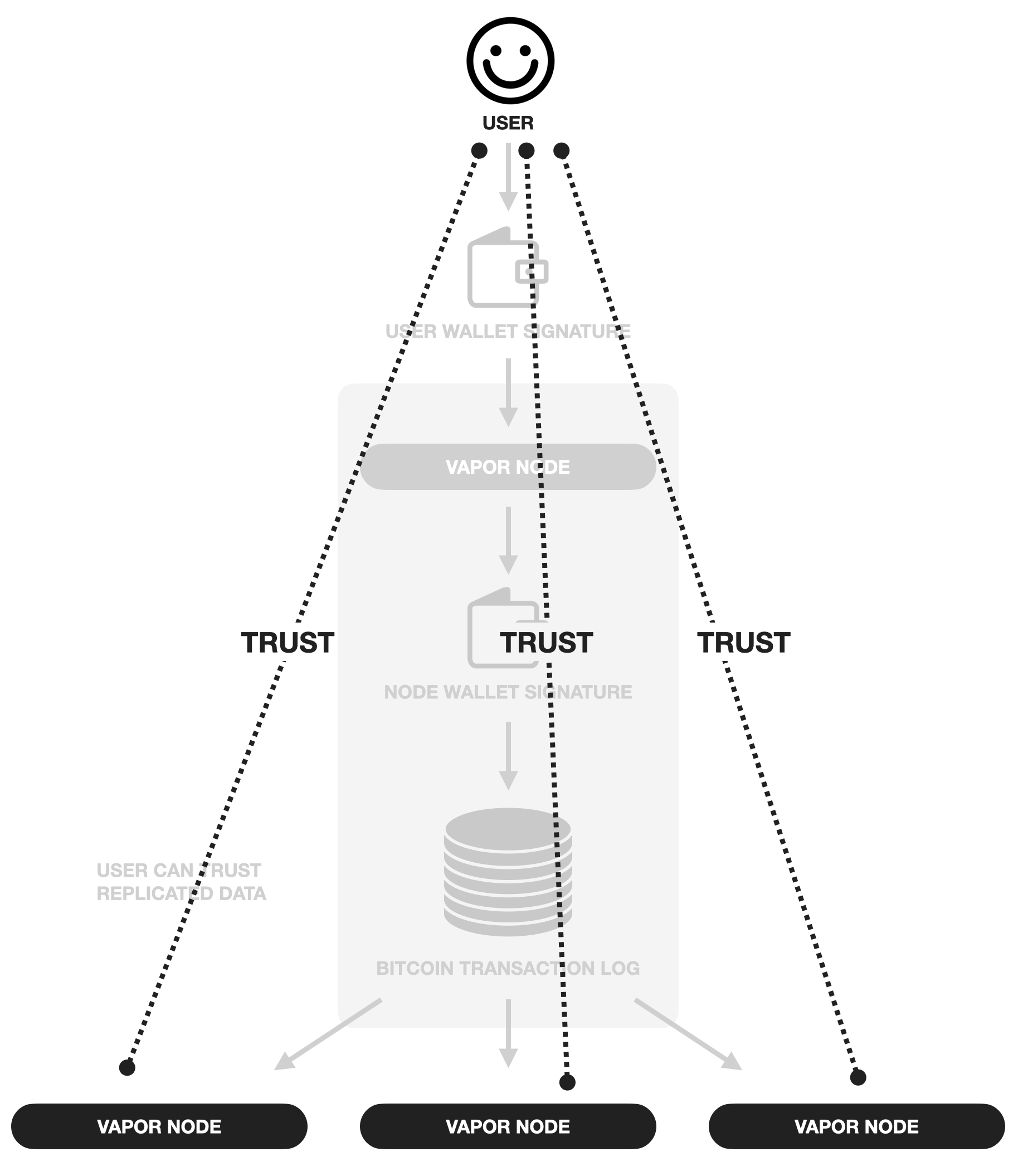 The 3rd party nodes only need to check:

This trustless replication results in the users being able to freely distribute their data everywhere that matters while keeping control.

NOTE: Don't be scared of the term "node". A Vapor "node" is simply a web server and there is no P2P node you have to run. Everything takes place over pure HTTP.

The more the API gets replicated in the "Vapor network", the more tamper-proof it becomes through network effect.

Data decentralization is but just one problem Vapor solves. To fix the rest of the Web, we need to tackle tricky issues surrounding incentives and ownership.

What problems does a "Bitcoinized HTTP" solve for HTTP?

The HyperText Transfer Protocol (HTTP) was originally invented to deliver static documents over the Internet and wasn't designed for the complex applications we have today and lacks important features on the protocol level:

By supercharging HTTP with Bitcoin, we get a lot of powerful features.

There have been many attempts at building a "decentralized web", and all of them require running some special P2P network (for example, every request must happen on some "blockchain" system or an obscure P2P network), which makes it difficult to build mainstream production-grade applications with high performance.

Vapor does not require anyone to run some "decentralized network" on their machine at all times.

Vapor is just HTTP. Think of it as building a regular web app but swapping out the centralized authentication and logging system with a decentralized version powered by Bitcoin tech.

Any web developer can take their existing web app and "Bitcoinize" it to build a decentralized web app.

Note: you can optionally connect to the Bitcoin network for advanced features such as micropayments and immutable timestamps, but these are not not necessary to build a Vapor app.

The only requirement is a Bitcoin wallet, which will be used to sign API requests.

Because every API request is explicitly signed by:

The frictionless monetization will change the incentive dynamics for the service providers and spur new creative business model innovations.

Because every HTTP request is wrapped in a Bitcoin transaction, it becomes possible to encode the API routing logic in the transaction itself.

Additionally, because Bitcoin script is programmable, the API routing itself can be programmed and driven by micropayments.